The past few weeks have all been about rocks, minerals, and the World Cup. With a side of drawing class.

It started with an old book on how to know minerals.

I didn’t read it, so I don’t know how to know them. But I do know that they are pretty. I’ve developed a special fondness for smithsonite.

I did not develop a fondness for Cristiano Ronaldo, Arjen Robben, or this guy’s hair.

My studio assistant was not as enthralled with rocks and minerals as I was.

The World Cup psychic animal pool was disappointing this year. The psychic horse that lives in a house? A false prophet. 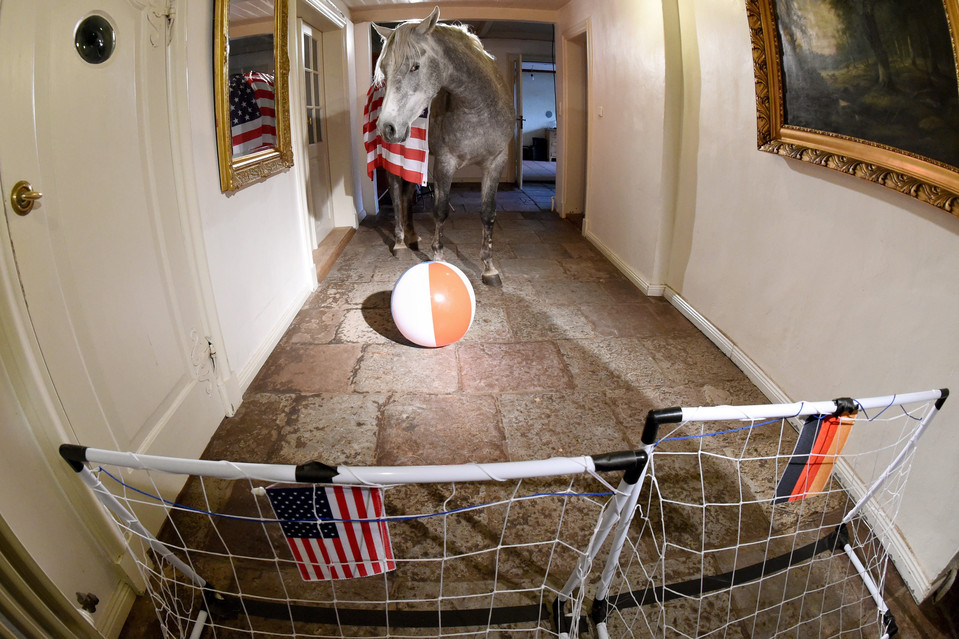 Perhaps the single greatest line to come out of the all the related World Cup coverage can be attributed to a spokesman for the Brazilian city of Curitiba, on the topic of their psychic capybaras.  “Capybara prediction is a science. You can trust it.”

I started working on a new kind of conglomerate during Argentina vs Iran.

“Hey Luis Don’t Bite Me” is the most tender folk song to come out the World Cup.

This is my manicure for the USA-Belgium match, seen amongst mineral debris.

People at the office were very busy working that day. A co-worker declared that we couldn’t lose to a team whose country’s mascot is a peeing boy. But, well.

Also that day I skipped my drawing class. A drawing class seemed like a good idea at the time. It is hot here in the summer, I needed novelty indoor entertainment. I quickly realized though that drawing wasn’t going to take. On the last day of class, we had to draw a replica plastic gourd. I dutifully drew the gourd until I couldn’t stand it anymore and began drawing strange lumps and offshoots on it, turning it into a vegetable not found in nature. When my teacher came by to check on me, I had to admit to her that I was not very interested in drawing reality. I don’t think she was pleased with me. It’s a good thing this class was not for a grade.

I did like smooshing around vine charcoal with my fingers though. Gummy erasers are also entertaining.

A couple of World Cup matches later, I had myself a giant conglomerate.

I was also following Colombia. Their coach received 400,000 write-in votes for president in the recent election. Then they lost to Brazil. When Germany then went on to beat Brazil 7-1 (what!), Colombia got very busy on the internet. The German embassy in Bogota’s Facebook page got 9,000 likes that day.

I wasn’t satisfied with just one conglomerate.

This entry was posted in Uncategorized and tagged collage.